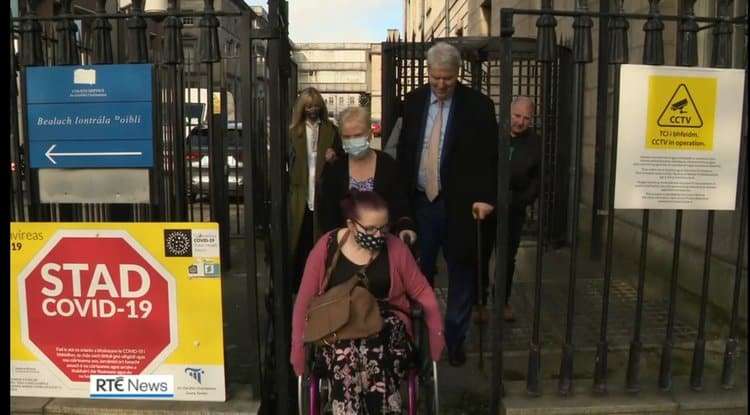 The High Court has approved a settlement of €10 million in the case of a 35-year-old woman who suffered brain damage after a delay in treating her for brain swelling caused by the herpes simplex virus.

Leanne Doyle from Wicklow town became ill when she was taking her newborn daughter home from hospital.

The High Court heard she suffered a seizure as she was walking to her car and was transferred from a maternity hospital to St Vincent's Hospital in Dublin.

She suffered a second seizure some days later and her lawyers told the court that the anti-viral medication, Aciclovir was not administered in time and could have prevented her condition worsening.

Aongus O'Brolchain said it was their case that the virus was allowed "to fester for three days" before the medication was given.

In her High Court action Ms Doyle, who sued through her father, claimed the hospital had failed to fully investigate the cause of her illness and to diagnose and treat her condition in time.

The claims were denied and the case was settled without admission of liability.

The court heard that Leanne has not been able to care for her daughter who lives with her ex-partner. She had to return home to live with her parents who are caring for her. She is now unable to walk, uses a wheelchair and has a number of physical and intellectual challenges but remains strong in spirit and is aware of her limitations.

Mr O'Brolchain said she very much wanted to live independently in the community and be able to care for her daughter which, with support, she could do.

Mr Justice Coffey said he had no hesitation in approving the settlement which was a reasonable one.

Afterwards Leanne's mother Ann said she was happy with the settlement which would allow her daughter to regain some independence.

The family's solicitor Michael Boylan described Ms Doyle as "an absolute hero with unbreakable spirit". He said today was a "joyful day in one sense but bittersweet as a seven-year ordeal came to an end".

"Hopefully this award is going to make a big difference for Leanne and it's the start of a new dawn and she will have her own independence and get back with her daughter, rebuild her own life that was tragically taken from her seven years ago.

"I've said this many times before but it is a crying shame that these cases go so far and are so contentious and liability was disputed to the bitter end...